What Happened to the Readymake: Duchamp Chess Pieces?

Over the last several months, we (Bryan Cera  and Scott Kildall) have been contacted by many people asking the same question: What happened to the Readymake: Duchamp Chess Pieces? 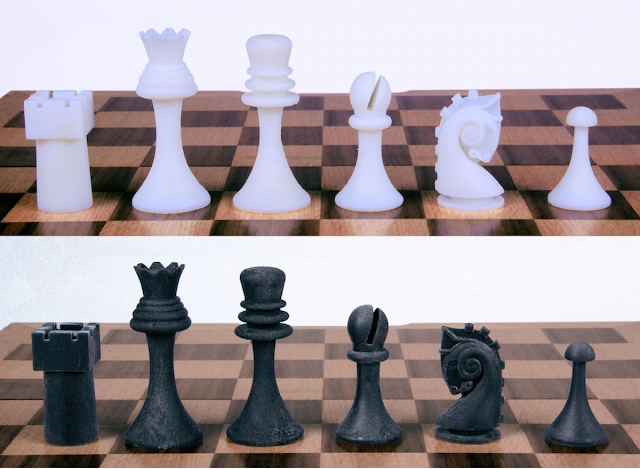 The answer is that we ran into an unexpected copyright concern. The Marcel Duchamp Estate objected to the posting of our reconstructed 3D files on Thingiverse, claiming that our project was an infringement of French intellectual property law. Although the copyright claim never went to legal adjudication, we decided that it was in our best interests to remove the 3D-printable files from Thingiverse – both to avoid a legal conflict, and to respect the position of the estate.

For those of you who are unfamiliar with Readymake: Duchamp Chess Set by Scott Kildall and Bryan Cera, this was our original project description:

Readymake: Duchamp Chess Set is a 3D-printed chess set generated from an archival photograph of Marcel Duchamp’s own custom and hand-carved game. His original physical set no longer exists. We have resurrected the lost artifact by digitally recreating it, and then making the 3D files available for anyone to print.

We were inspired by Marcel Duchamp's readymade — an ordinary manufactured object that the artist selected and modified for exhibition — the readymake brings the concept of the appropriated object to the realm of the internet, exploring the web’s potential to re-frame information and data, and their reciprocal relationships to matter and ideas. Readymakes transform photographs of objects lost in time into shared 3D digital spaces to provide new forms and meanings.

Just for the sake of clarity, what we call a “readymake” is a play on the phrase “readymade”. It is ready-to-make, since it can be physically generated by a 3D printer.

Our Readymake project was not to exist solely as the physical 3D prints that we made, but rather as the gesture of posting the 3D-printable files for anyone to download, as well as the initiation of a broader conversation around digital recreation in the context of artwork. We chose to reconstruct Duchamp’s chess set, specifically, for several reasons.

The chess set, originally created by Duchamp in 1917-18, was a material representation of his passion for the game. Our intention was not to create a derivative art work, but instead to re-contextualize an existing non-art object through a process of digital reconstruction as a separate art project.

What better subject matter to speak to this idea than a personal possession of the father of the Readymade, himself?  Given the artifact’s creation date, we believed it would be covered under U.S. Copyright Law. We’ll get back to that in a bit. 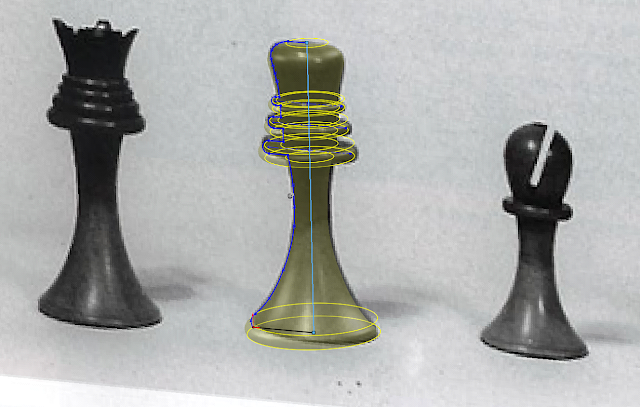 On April 21st, 2014, we published this project on our website and also uploaded the 3D (STL) files onto Thingiverse, a public online repository of free 3D-printable models.  We saw our gesture of posting the files not only as an extension of our art project, but also as an opportunity to introduce the conceptual works of Duchamp, specifically his Readymades, to a wider audience. 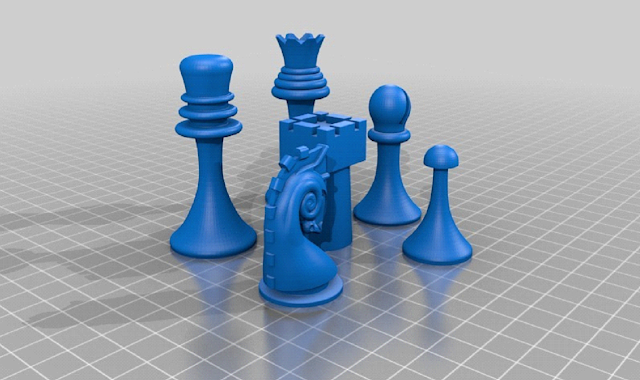 The project generated a lot of press. By encouraging discussion between art-oriented and technology-oriented audiences, it tapped into a vein of critical creative possibilities with 3D printing. And perhaps, with one of Marcel Duchamp’s personal belongings as the context, the very notions of object, ownership and authenticity were brought into question among these communities.

Unfortunately, the project also struck a nerve with the Duchamp Estate. On September 17th, 2014, we received a cease and desist letter from a lawyer representing the heirs of Marcel Duchamp. They were alleging intellectual property infringement on grounds that they held a copyright to the chess pieces under French law. 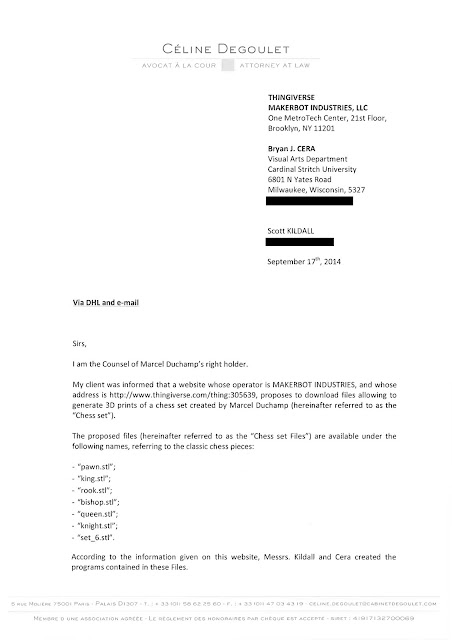 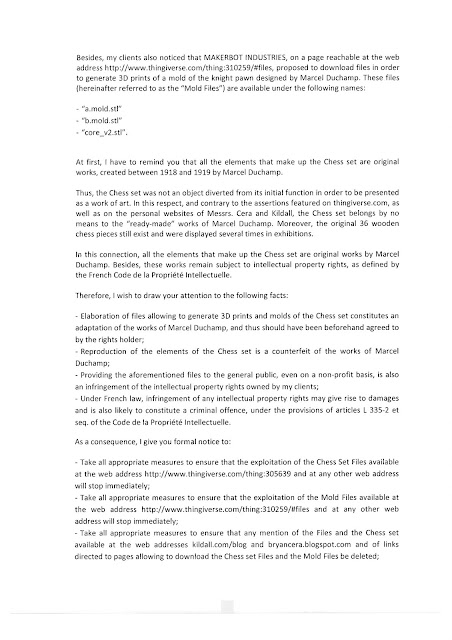 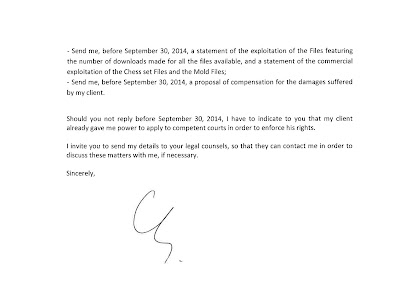 We assessed our options and talked to several lawyers. Yes, we talked to the Electronic Frontier Foundation...and others. We were publicly quiet about our options, as one needs to with legal matters such as this. The case was complex since jurisdiction was uncertain. Does French copyright law apply? Does that of the United States? We didn’t know, but had a number of conversations with legal experts.

Some of the facts, at least as we understand them

1)  Duchamp’s chess pieces were created in 1917-1918. According to US copyright law, works published before 1923 are in the realm of “expired copyright”.

2) The chess pieces themselves were created in 1917-1918 while Duchamp was in Argentina. He then brought the pieces back to France where he worked to market them.

3)  According to French copyright law, copyrighted works are protected for 70 years after the author’s death.

4)  Under French copyright law, you can be sued for damages and even serve jail time for copyright infringement.

5)  The only known copy of the chess set is in a private collection. We were originally led to believe the set was 'lost' - as it hasn't been seen, publicly, for decades.

7)  Legal jurisdiction is uncertain. As United States citizens, we are protected by U.S. copyright law. But, since websites like Thingiverse are global, French copyright could apply.

Our decision to back off

Many people have told us to fight the Estate on this one. This, of course, is an obvious response. But our research indicated this would be a costly battle. We pursued pro-bono representation from a variety of sources, and while those we reached out to agreed it was an interesting case, each declined. We even considered starting a legal defense fund or crowdsourcing legal costs through an organization such as Kickstarter. However, deeper research showed us that people were far more interested in investing in technology gadgets than in legal battles.

Finally we ascertained, through various channels, that the Estate was quite serious. We wanted to avoid a serious legal conflict.

And so, without proper financial backing or pro-bono legal representation, we backed off — we pulled the files from Thingiverse. This was painful – it was incredible to see how excited people were to take part in our project, and when we deleted the Thingiverse entry and with it the comments and photo documentation shared by users, we did so with much regret. But we didn’t see any other option.

Initially, we really struggled to understand where the estate was coming from. As part of the estate’s task is to preserve Duchamp’s legacy, we were surprised that our project was seen by them as anything other than a celebration, and in some ways a revitalization, of his ideas and artworks. Despite the strongly-worded legal letter, we heard that the heirs were quite reasonable.

The resolution was this: we contacted the estate directly. We explained our intention for the project: to honor the legacy of Duchamp, and notified them that we had pulled the STL files from online sources.

We were surprised by the amicable email response — written sans lawyers — directly from one of the heirs. Their reply highlighted an appreciation for our project, and an understanding of our artistic intent. It turns out that their concern was not that we were using the chess set design, but rather that the files - then publicly available — could be taken by others and exploited.

We understand the Estate’s point-of-view - their duty, after all, is to preserve Duchamp's legacy. Outside of an art context, a manufacturer could easily take the files and mass produce the set. Despite the fact we did put this under a Creative Commons license that stipulated that the chess set couldn’t be used for commercial purposes, we understand the concern.

If we had chosen to stand our ground, we would have had various defenses at our disposal. One of them is that French law wouldn’t have applied since we are doing this from a U.S. server. But, the rules around this are uncertain.

If we had been sued, we would have defended on two propositions: (1) our project would be protected under U.S. law; (2) not withstanding this, under U.S. law, we have a robust and widely-recognized defense under the nature of Fair Use.

We would make the argument that our original Duchamp Chess Pieces would have have added value to these objects. We would consider invoking Fair Use in this case.

But, the failure of a legal system is that it is difficult to employ these defenses unless you have the teeth to fight. And teeth cost a lot of money.

We thought about how to recoup the intent of this project without what we think will be a copyright infringement claim from the Duchamp Estate and realized one important aspect of the project, which would likely guarantee it as commentary is one of parody.

Accordingly, we have created Chess with Mustaches, which is based on our original design, however, adds mustaches to each piece. The pieces no longer looks like Duchamp’s originals, but instead improves upon the original set - each piece adorned with a mustache. 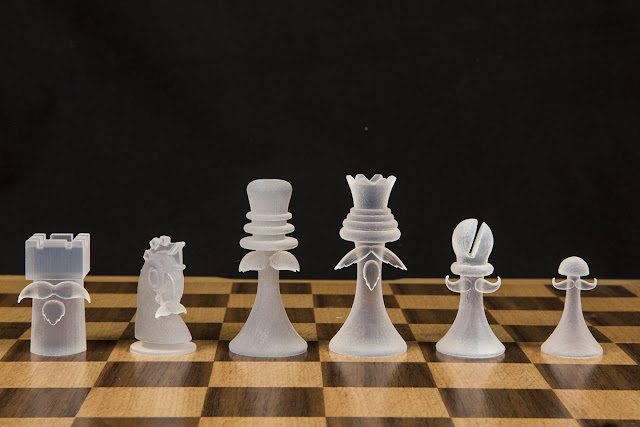 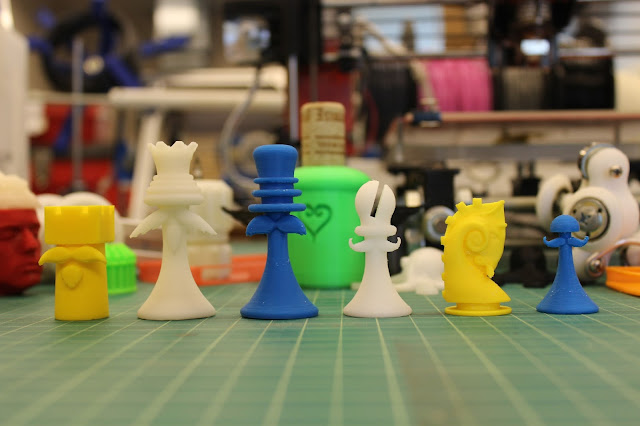 The decorative mustache references vandalized work, including Duchamp’s own adornment of the Mona Lisa. 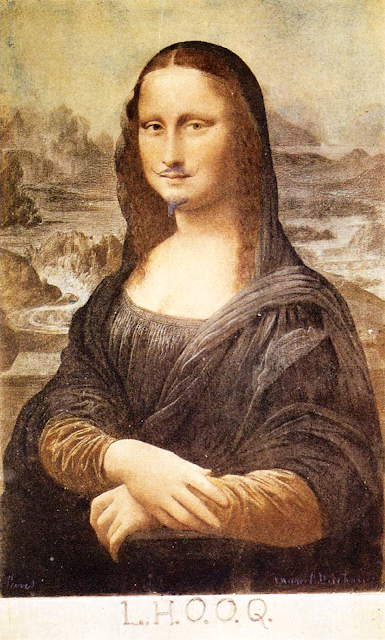 Coming out with this new piece is risky. We realize the Duchamp Estate could try to come back at us with a new cease-and-desist. However, we believe that this parody response and retitled artwork will be protected under U.S. Copyright Law (and perhaps under French law as well). We are willing to stand up for ourselves with Chess with Mustaches.

Also for this reason, we decided not to upload the mustachioed-pieces to Thingiverse - or any other websites for downloadable models. They were created as physical objects solely in the United States. 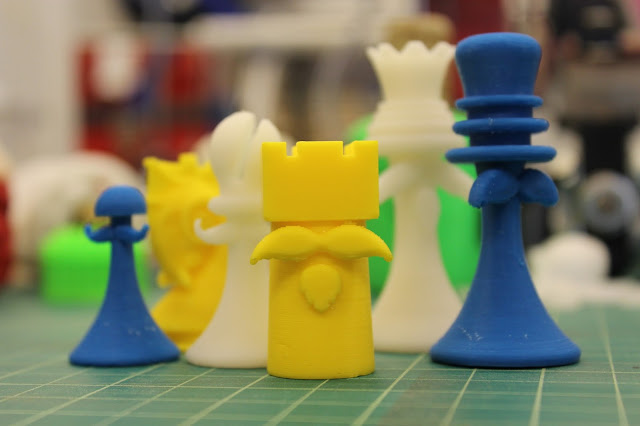 3D printing opens up entire new possibilities of material production. With the availability of cheap production, the very issue of who owns intellectual property comes into play. We’ve seen this already with the endless reproductions on sites such as Thingiverse. Recently, Katy Perry’s lawyers demanded that a 3D Print of the Left Shark should be removed from Shapeways.

And in 2012, Golan Levin provided the Free Universal Construction Kit, a set of 3D-printable files for anyone to print connectors between Legos, Tinker Toys and many other construction kits for kids. Although he seems to have dodged legal battles, this was perhaps a narrow victory.

Our belief is that this our project of reviving Duchamp’s chess set is strong as both a conceptual and artistic gesture. It is unfortunate that we had to essentially delete this project from the Internet. What copyright law has done in this case is to squelch an otherwise compelling conversation about the original, Duchamp’s notion of the readymade in the context of 3D printing.

Will our original Duchamp Chess pieces, the cease-and-desist letter from the Duchamp Estate and our response - Chess with Mustaches - be another waypoint in this conversation?

And what would Marcel Duchamp have thought of our project? We can only guess. 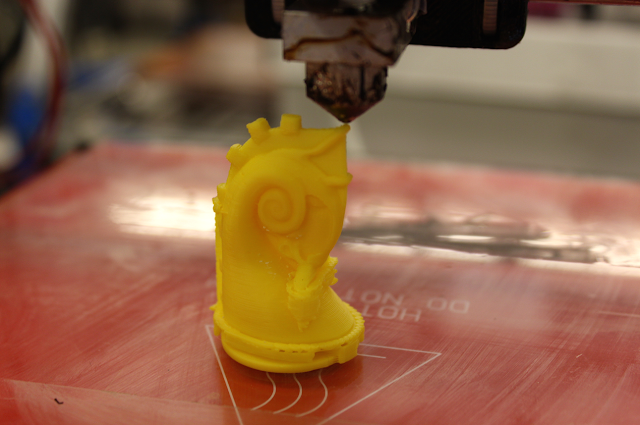